To develop a transport strategy for Keynsham, you have to first understand the underlying problems with Keynsham. I don’t think the strategy document fully gets to grips with the primary issues. I also feel that the ‘strategy vision’ is very focused on one type of transport:

To minimise the negative effects of traffic congestion in and around Keynsham and ensuring it retains its independence and its separate identity within an attractive rural setting by becoming a more sustainable, desirable and well-connected place in which to live and work.

This strategy document is all about cars and how to get them through the town. It should be much much more about living in the town and creating a network of walking and cycling routes.

Firstly we need to look at Keynsham and what is causing the issue with congestion.

Keynsham has a major issue. It is a town of two halves. The river divides the town and funnels traffic onto very specific roads and it is not even caused by people that live there. 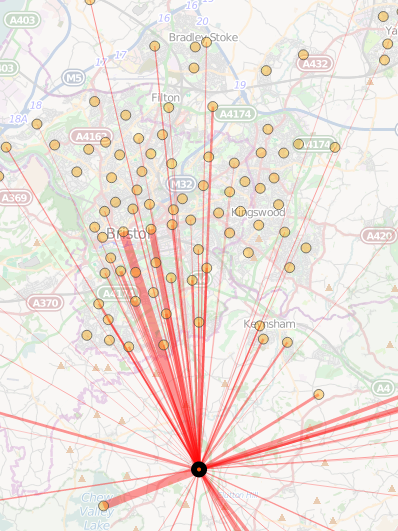 Not many people are travelling south through Keynsham

And in fact most of Keynsham seems to be either heading towards Bristol or to Bath: 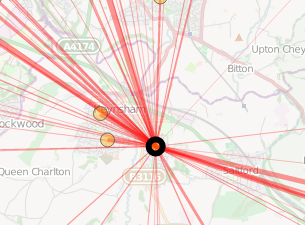 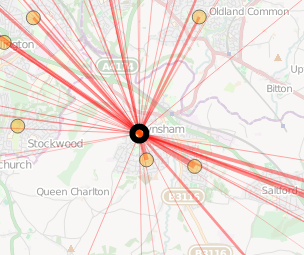 Apologies for the images but this type of thing is important to work out.  So if you want to solve the traffic through the town, build two roads circumventing the town completely.

Now this won’t solve the issue of the High street, but I don’t think you actually have to.  With the two new roads in place you can just close the High street and have cars go via Ashton Way.

It is radical, but it would work.

When you look at the town, it really is a town of two halves.

I’m guessing a huge number of kids get driven to school. I mean this 9 minute cycle ride takes you along some hellish roads 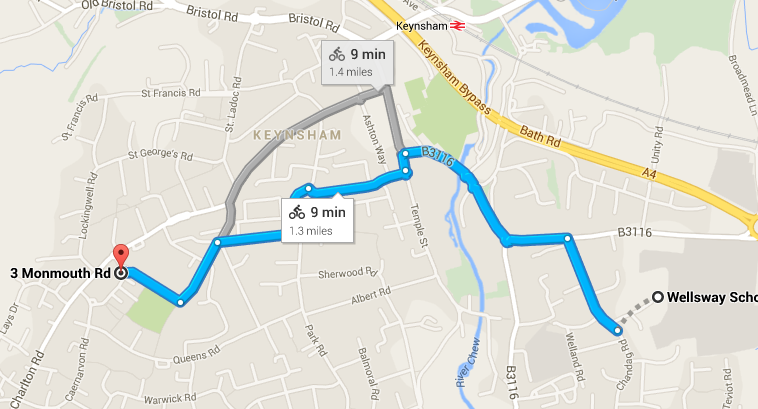 Ideally there would have been quiet ways or even traffic free cycle paths linking you from one side of the town to the other, but unfortunately the river and the large amount of private land in the middle is blocking a safe route. There is only ONE other pedestrian route the links one side to the other.

This town needs gluing back together through a series of footpaths and cycle ways that enable families to criss cross the town.

Let’s be honest, the train station is in probably the worst location it could be. It is completely detached from the town centre and the only ‘comfortable’ route to it is by car. The roads feel narrow and fast and there is absolutely no way you would consider cycling to the train station with your family. Even the footpaths are narrow and parts of the route have you riding near walls.

Again it feels like Keynsham forgot the idea that cycling or walking are good things.

It doesn’t help that even if you cycle to the train station, the cycle storage facilities are poor.

The reality is that the train station is not really part of Keynsham. You might as well drive.  There is no pleasant traffic free route to get to the station. It’s not easy to use or even pleasant when you get there.

On the last page of the strategy is the following graphic comparing 2011 to what 2022 will be.

I’m not sure a strategy that pretends to sort out a load of stuff by making driving a car easier is going to have the desired effect of reducing car use. We keep doing the same type of design thinking we will end up with the latter chart.

We should be trying to connect communities through a network of cycle and walking infrastructure. Keynsham is one very sick town and it is only going to get worse without a radical re-prioritisation of transport modes.

You need to get the car out of Keynsham.