It’s not the Air Quality stupid: CAZ treat the effect not the cause

Tackling Air Pollution, as BaNES are demonstrating, can simply mean “buy a newer car” and by newer, by 2021, a 15 year old petrol or 6 year old diesel. Surprise surprise, by 2025 traffic would have increased by 6% (large pdf). The table can be found in one of the annexes.

An extra 6% cars on our roads by 2025 from 2021 levels, let’s assume 10% from 2018 levels will break Bath. Transport schemes are about changing behaviour and the various different proposed Clean Air Zones will get people buying a 15 year old petrol or 6 year old diesel in 2021. It will also make the Batheaston Toll Bridge one of the busiest bridges in the world. Bathampton is going to be wrecked but this is the BEHAVIOUR that the CAZ is encouraging.

Fix the cause, not the effect

As raised repeatedly at the Transition Larkhall Transport Workshop by woman after woman speaker, Bath’s roads are terrifying to cycle on and our celebrated leisure cycling network (Two Tunnels, the River Path) is isolated and perceived not socially safe to use late at night.

Bath will STILL be broken. Bath’s built environment will STILL force many people into cars as they feel they have NO other travel choice.

If we want to see Bath flourish as a city and not be choked by the car, then it is the behaviour of residents and visitors to the city that we must change. Of the 27,700 people that commute to work by car into the city (Census 2011), 8,300 live in Bath and drive to work in Bath. The council *knows* this. To tackle Air Pollution you need to change the behaviour of people. You need to get them out of their cars. 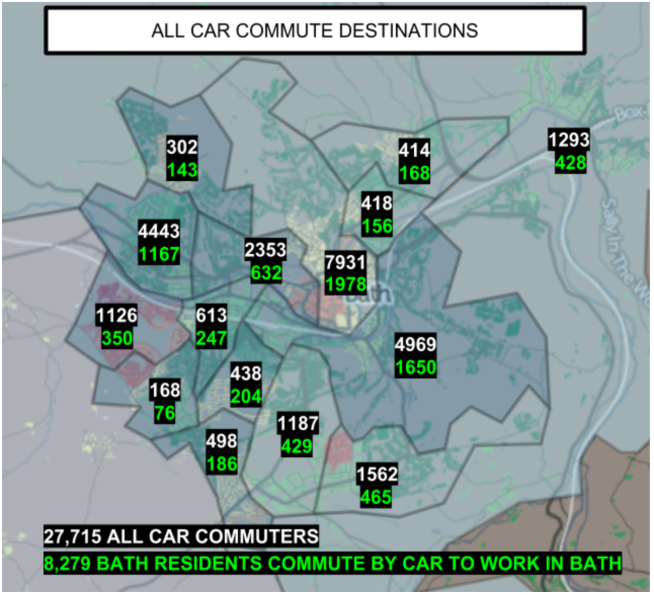 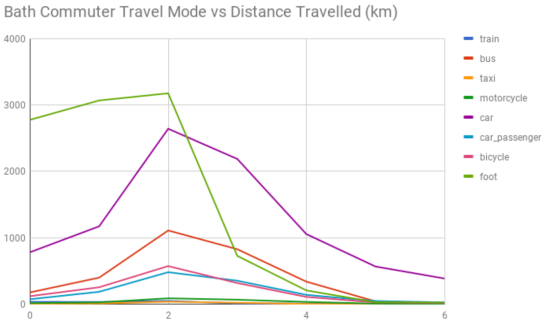 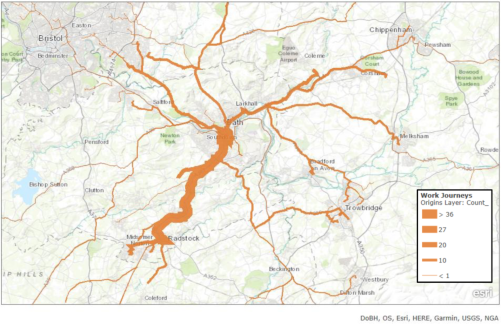 Your CAZ is an ASBO

The three proposed sizes had me looking at whether I could circumvent them. From What I can work out, you can come in from Radstock, pile along Bradford Road, down Prior Park Road and out along Warminster road, through Bathampton, pay the Batheaston Toll Bridge of 80p and out along the A46.

At each size there are ways to use residential rat runs to avoid the CAZ. If you are going to do right by Bath, you have to do right by the whole of Bath, Batheaston, and Bathampton. The currently proposed Zones create really bad anti-social behaviour that disproportionately impacts outlying areas of the city.

You need an even bigger “extra large” CAZ that recognises that any CAZ will create rat running behaviour and to mitigate it.

When I attended the excellent Transition Larkhall Transport workshop attended by close to 100 local and regional people, group after group demanded strong political will and the willingness to tackle transport issues in an effective, if politically uncomfortable way.

The Conservative led council, behind closed doors, has come up with a way to encourage you to buy a newer car and force First to bring in newer buses.

The Air Quality Action Plan feels like a whitewash that does little to tackle the 617,000 cases of obesity referred to the NHS on a yearly basis.

I cannot tell you how disappointed I am that the council has not tried to tackle Bath’s traffic. Solutions exist. Holistic, integrated solutions. Solutions that work for everyone.

Clean Air Zones are not bad

Now reading this, you might think I have a problem with the introduction of a clean air zone. This is not the case. A CAZ will reduce NOx.  It will get dirtier older vehicles off our roads. It will make money for the city to do other things.

More interestingly a CAZ requires the setup of Automatic Number Plate Recognition cameras throughout the city. It enables congestion charging, road pricing, policing of uninsured/no MOT/untaxed cars. It can even be used to bring in average speed camera networks. You could even introduce School Streets, fining parents for dropping off their kids outside schools. The ANPR network has potential to be used for other schemes down the line.

My problem is simply that we had an amazing opportunity that has been squandered for political expediency.

It won’t significantly reduce PM2.5s, PM10s, or Hydrocarbons, many of these have been linked to dementia, cancers, and respiratory illnesses. It won’t tackle transport related obesity. It will do nothing to make our public environment less hostile.

We should have been introducing a raft of measures, not just a CAZ, that would have made the city a healthier place to live.