North Quays is a piece of the puzzle that completes the vision for the Bath Enterprise Area.

If we examine the role Bath North Quays plays within this vision we see it’s key role is to provide the major cycle route that connects the west of the city to the Bath Spa Train Station.

In other words it is a vital corridor for active travel.

However the reality of the North Quays Outline Planning Consultation is that this travel corridor has not been provided for. 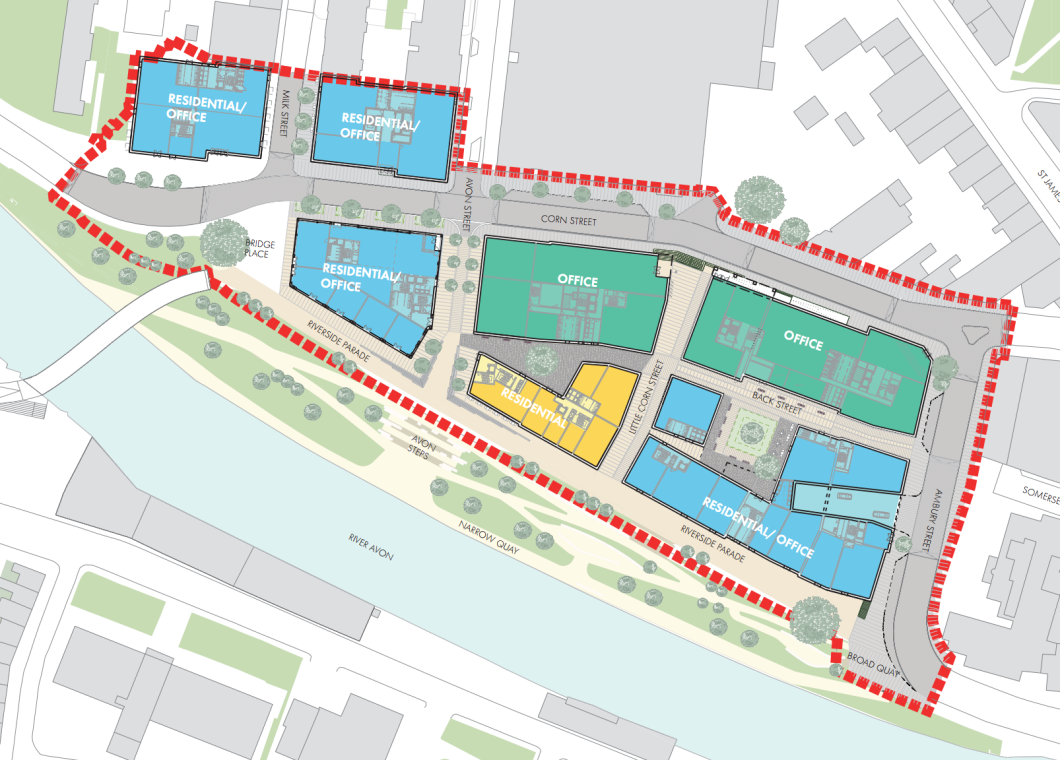 Alarming it also goes against the current requirements in the Design Manual for Roads and Bridges, in particular IAN 195 This is a busy 30mph A road and as per the DMRB this requires cycle tracks. Segregated cycle infrastructure is the required infrastructure.

Yet what the council is proposing is that the South Quays route which will be significantly more attractive once the vision is implemented fully, should be the preferred route for cyclists to then ride along Riverside Parade, then dumping them onto the dual carriageway that is Ambury Street or, the more realistic solution, to ride the wrong way along the footpath round to the Bus Station then rejoin the carriageway on Dorchester Street.

Riverside Parade is also going to be prime café area with on road seating. It’s going to be a major focus for making this into a beautiful public realm for enjoying the river side. It’s brilliant, but should not be a preferred through route for the majority of people cycling from the south of the city.

The problem is that I met Cllr Anketell-Jones on site months ago. We discussed in detail the issues around creating a cycle desire line along Riverside Parade and we raised it with the officer responsible for the enterprise area and the plan has still not changed.

We, Cycle Bath, are simply asking that the council actually stick to the rules and regulations they love so much and deliver something that actually meets the DMRB. Build infrastructure to modern standards.

The big failure with the council and how they are looking at the North Quays is to consider better fundamental changes to the build environment. My proposed ‘Living Heart’ gives a better answer to their problem.

The proposed scheme re-opens Milk Street making it a new rat run into the heart of the city. I have no idea why a council, strapped for cash would not create one large office/resident block rather than two blocks cut through by an unnecessary new road. Not sure I’ve heard of councils creating roads.

The officers who came up with this were warned, they did not listen, and are now proposing a poor implementation that goes against current regulatory guidance. There is an implicit assumption that pedestrians can be used to slow down cyclists. The Riverside Parade MUST be a destination, not the most ‘safe’ feeling route to use as a cycle cut through. Protected cycle tracks is a requirement on a high volume 30MPH A road. Failure to consider these as part of the scheme show a training issue within the council Highways team and a very real mindset issue to take cycling seriously as its own form of transport and not one that can be controlled by throwing pedestrians in cyclists way.

They are even going so far as to deliver two below value buildings by building a new unnecessary road rather than delivering one cohesive building. The council is literally taking high value land and building roads on it. You could not make this up.