[EDIT 10th of July] In light of a site visit this article was redacted given the inaccuracies and uninformed nature of the comments. It is now re-instated with sections crossed out for clarity to limit any criticism that we might be hiding something. During the visit the developer informed us that it was the council’s Highways officer that required the closing of the access ramp to people walking and cycling and this is why the barrier was placed there. The funding model of the STR connections outside the site through section 106 by the developer is complicated as the full state of them is unknown and the estimated £285k is a guess by the developer with no full structural understanding of the council’s STR sections. Also the site is fully accessible to people in wheelchairs.

The position Cycle Bath had taken on the Hartwells Development Proposal was to remain neutral. They’d implemented suggestions creating a  3.5m wide walking and cycling route through the scheme which meant that our long term ambition of the Locksbrook Greenway Scheme was going to be delivered.

John Taylor has been watching this planning application and informed me that a letter from the agent (Document-3C0DB35CF01BF5B2F83EE11A962DBF4C) in response to the 276 objections has been added and it’s horrendous.

Pedestrian and bicycle access between Newbridge Road and the STR
Pedestrian access between Newbridge Road and the STR has been carefully considered and will be encouraged; the routes through the site, promoting permeability and links to the STR, are publicly accessible. The principal route is opposite Charmouth Road and comprises of a large stair (some 3 metres wide with a shallow rise, generous goings and frequent landings) and a lift which has been sized to accommodate 2 cyclists and their bikes. The second route is a stair linking Newbridge Road and the STR via the upper carpark. Again, this has been sized with cyclists and pedestrians in mind. To further encourage access, it is proposed that a bike runnel is incorporated into both stairs; this will be subject to detailed design at a later stage. For the avoidance of doubt, the vehicle access ramp will be gated and not publicly accessible. It will be operated by residents with passes and will not be able to be used by pedestrians or cyclists wishing to move from Newbridge Road to the STR or vice versa. This avoids potential conflict between vehicle and pedestrian movements, they remain segregated.

Access through the site for cycles will be via steps with ramps. This approach on Victoria Bridge resulted in real issues for people with disabilities. The access road will have a barrier. There is no footpath along the access road. There is no cycle-able access from here to Newbridge Primary School that supports the Cycle Design Vehicle as specified by Highways England (1.2m wide x 2.8m long) and by Wheels For Wellbeing.

Given the low volumes of traffic, a rising bollard and a 5mph speed limit would have been enough to allow the access road to be used for walking, cycling, and driving.

Funding of STR connections
Turning to the delivery of the STR connections, the Planning Statement states how the development will fund the connections of the STR to Brassmill Lane and Station Road (i.e. outside of the site ownership) and has identified a cost to this which is included in the Planning Statement and within the Viability Report. However, as set out within the Planning Statement, in our opinion this cycle route outside of the red line boundary constitutes strategic infrastructure for the purposes of the Regulation 123 List and is therefore appropriate to fund this via CIL. We note that the Highways Officer is stating this should be via S106 funding, however if this is the case then this will have an impact on the viability of the scheme and in turn impact on the funding of other S106 items e.g. the level of affordable housing the scheme can realistically deliver. We request that the Council confirms the approach on this matter.

[EDIT] Link to the viability report (Document-FF2AC287D37C129567D2D25DAAAC6693) and the £285,000 cost of delivering, probably the biggest benefit to the city of Bath they object to. It is important to recognise that CIL goes into a general community pot that can be spent anywhere, whereas Section 106 is used for improvements to the area around the development: 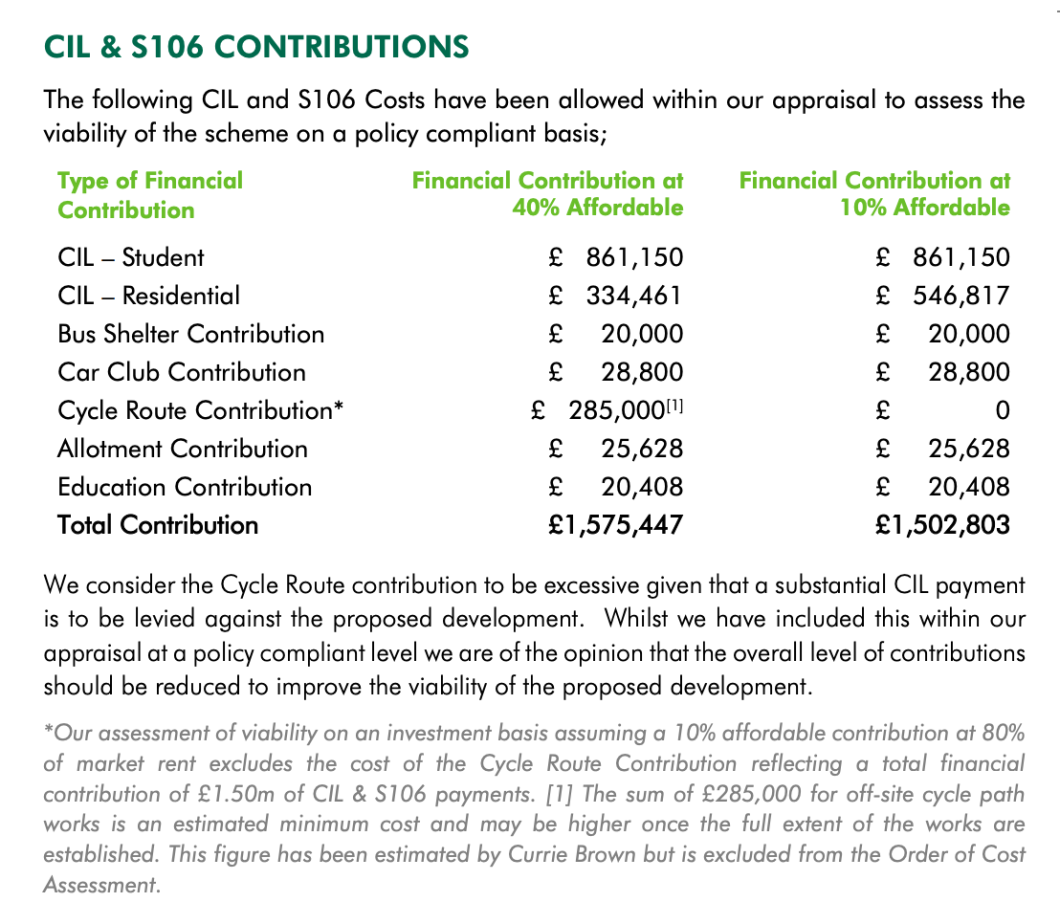 I still believe the site needs a ramp up to Osborne Road but was ok with the ‘loop’ that people would make via the access road as, long term, I see Osborne Road Bridge closed to vehicles and becoming a two way pedestrian/cycling bridge.