If you haven’t guessed this one is going to be all about the renovation of the Widcombe Subway.

The barriers have now been removed.

This is a renovation that locals in the area did not want and one that was imposed on them by traffic modelling and air pollution. Yes, Cllr Clarke suggested a level crossing would create air pollution. Oh and despite there being a level controlled crossing on the west of the roundabout.

I have emails about this going back to 2016 where people were asking for a level crossing. The decision to renovate the 1970s subway predates the golden era in transport policy brought about by Cllr Shelford and is the last gasp of the dark ages of Cllr Clarke (a.k.a Mr 30mph).

You cannot paint over tight corners and very confined space to make it better. It’s simply a horrible shared space route that we should have just filled in and left to rot.

What they should have built.

The real issue with Churchill Roundabout is that it’s horrible to use and the south exit is an RTC black spot. I drew this proposal and I realised last night that by opening up one of the arches you could have created a very wide route into the city centre rather than the narrow path through the bridge. 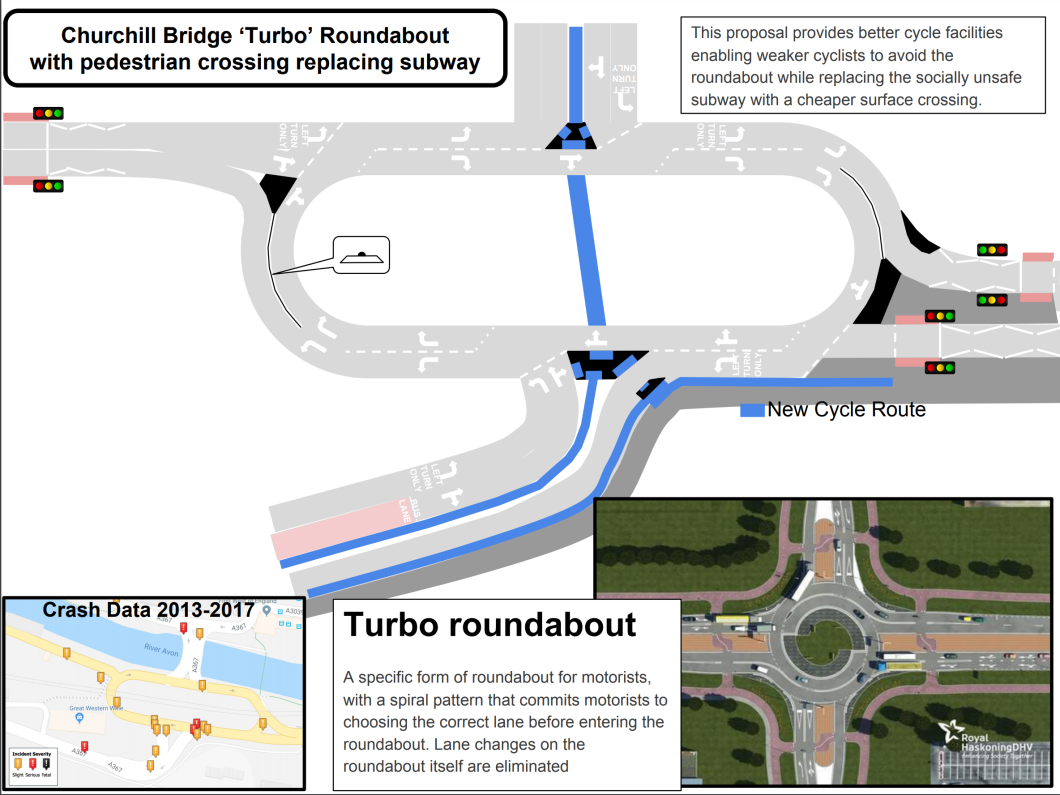 It needed imagination and a willingness to prioritise walking, cycling, and tackle car dependency. Instead we, the people of Bath, are sacrificed at the god of vehicle traffic flow.

Concerns for the future

As a side note, Cllr Mark Shelford has announced he is running for Police Crime Commissioner. This is hugely disappointing as this is likely to mean, should Mark retain his ‘seat’ and the Conservatives win in May, he is likely to step down as Cabinet Member for Transport . No matter your colour be it red, blue, green, or yellow, it is the individual councillor’s views and capabilities that make the difference. Mark has been excellent and very capable but his predecessor was really really really bad. We are *still* suffering from his predecessors handy-work and he has left a legacy of issues that still need fixing.

Mark’s legacy, particularly beginning the introduction of the Oxford Walking and Cycling standards should stand us in good stead for decades to come.