The Problem with the Bath East Park and Ride

This one is probably going to be a long one, so for those who want a quick summary…

Park and Ride systems are primarily sold to the public as solving congestion and pollution. In reality they have little impact in those areas. However, they do increase economic activity and this is cited by councils as “success” after they are built and their impact is evaluated. The fact they did little to decrease congestion or pollution or the fact they increased congestion around the P&R site is quietly swept under the carpet.

For those who have a little bit more time, read on.

When looking at the East Park and Ride sites, it’s very easy to get emotional about the destruction of our green spaces to accommodate 1400 cars. Personally I believe site H (Bathampton Junction) was the best site out of a bad lot. However the Halcrow report (pdf) conclusions for site H are so far off the mark that it had to be excluded from the site selections.

If you are going to look at all the other sites as park and ride and analyse site H as park and rail with an underpass under the A46 (18 month closure of A46) rather than a roundabout, you will get a cost of £37m. The Lib Dems have estimated the cost of Site H at £7M vs £5M for the other sites. Site H would have double the capacity of the other sites giving a significantly lower cost per parking space.

I also think the fact our MP is pushing to get funding for the A46/A36 bypass and should have an answer by the end of the year should have delayed the consultation. The bypass would have significantly reduced the cost of site H as a park and ride.

However the real issue I have is about the way this Park and Ride has been sold as a solution to alleviate congestion to the general public. It’s a lie and the council has to know this.

The Historic Towns Forum, of which Bath is a member, released a highly regarded report on Park and Rides in 2009 titled “The effectiveness and Sustainability of Park and Ride” (pdf). The report was collated from answers HFT members gave to a survey.  It would be EXTREMELY interesting to see if Bath submitted a completed survey and what those answers were.

What the report discusses, and I do not want to detract from the importance of this, is that if you are building a Park and Ride with the objective of reducing congestion, then you are building it for the wrong reasons. It does discuss Park and Ride as part of an integrated transport policy when the objective is reducing congestion, but even then it’s at the bottom of the pile of tools a city should be focused on.

I cannot stress enough how important that report is. I am going to quote the Discussion section word for word here:

What do we mean by success? Success depends on the original objectives. The main reasons for implementing P&R related to congestion, accessibility and air quality. However, the main reasons for success appear to relate to economic benefits, increased usage, and attracting more visitors to the town. P&R appears to be failing to reduce traffic flows and congestion consistent with the original aims. Can it therefore be considered a success? At a local level success appears to be defined by economic success rather than environmental or sustainable success.

Park and Ride may still have a role to play as part of a successful integrated transport strategy, perhaps on a reduced scale as part of an overall access strategy incorporating a number of alternative long and short range access measures. A sustainable transport strategy needs to retain the accessibility that Park and Ride can provide and therefore needs to incorporate a number of alternative schemes such as Link and Ride, Public Transport Priority and Frequency Improvements, Park and Cycle, Cycling Improvements and Road Space Reallocation.

Existing studies show that alternative schemes have the potential for congestion, environment, social exclusion, society, economic and health benefits. Potential alternative or complimentary measures which could form part of an integrated transport strategy have been briefly outlined below.

Cycling Cities – This would give greater priority to cyclists over vehicular traffic and more direct and safer cycling routes to encourage and increase the level of cycling for shorter journeys within cities. This could incorporate measures such as the reallocation of road space for cycling lanes, priority at junctions and signals for cycling flows over car flows.

Park and Cycle – This measure is similar to a P&R scheme, however the bus journey is replaced with a cycle journey. This sort of scheme would compliment and build upon cycling improvements detailed above and allow visitors travelling from further away to travel via cycle for part of a journey. A park and cycle scheme would also require strong marketing and a ‘presence’ within a P&R site so that users are aware of its existence increasing the chances of a change in travel behaviour.

Link and Ride – This allows long range access utilising existing bus routes, with a series of smaller car parks located close to the users home locations. This allows the parking to be spread over a larger distance, utilising facilities that may not be fully in use during the day such as village halls, public houses and restaurants. As the car park is located closer to the home location of users, the car part of the journey would be shorter and the bus journey increased in length. This has the potential to reduce emissions and congestion whilst allowing long range access to a proportion of existing P&R users. In addition, ‘conventional’ bus services could be enhanced and protected providing a benefit to existing public transport users and those without access to a car. This solution can therefore provide social exclusion benefits. Due to the scale of a Link and Ride scheme, car parks would be required across a number of Local Authority boundaries and would therefore require political coordination.

Public Transport Enhancement – Public Transport can also be enhanced through the use of technology to improve the user experience and therefore make it a more attractive alternative to the car. This could incorporate such measures as mobile technology whereby the bus arrival time is linked to users mobile phones providing users with the knowledge of when to leave the house and reducing waiting times at the stop. This could be incorporated into a bus priority system, whereby buses are tracked to allow them priority at signals and junctions so allowing consistent and reliable journey times. In addition, Real Time Passenger Information could be provided at bus stops along with more comfortable and user friendly buses incorporating services such as WiFi. Further enhancements could be provided through the provision of Guided Busways allowing a dedicated track for buses which enables more reliable journey times.

A reduction in scale of P&R requires greater emphasis on these alternative solutions. These would form an integral part of an integrated transport management strategy to reduce car use. P&R has been implemented for over three decades and so far there is limited evidence of its contribution for reducing car use even where implemented with other measures and reducing parking in central areas. Perhaps it is now time to see what changes in travel behaviour more ‘radical’ alternative approaches can achieve.

The final paragraph has within it one of the key issues with Park and Ride schemes.

P&R has been implemented for over three decades and so far there is limited evidence of its contribution for reducing car use even where implemented with other measures and reducing parking in central areas.

Like I said I have no issue with Park and Ride schemes but let’s have an honest evidence based discussion on this. The East Park and Ride will not reduce congestion on London Road.

So when people justify Park and Rides through the use of this type of picture, it is an utter lie. 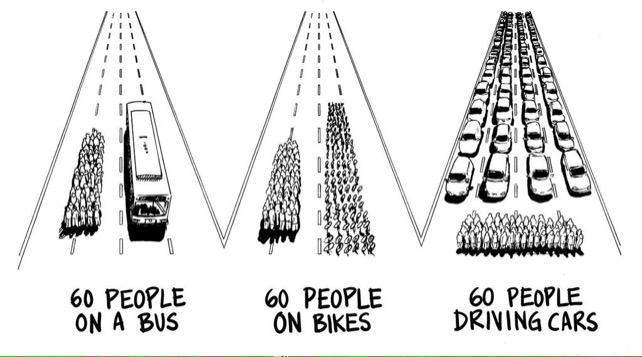 The scheme drawings demonstrate the same issues that we raised with the Newbridge Park and Ride scheme. A total failure to integrate the scheme within the community it is serving. There is no recognition that access from the Park and Ride to the towpath for walking and cycling OR that there is an existing footpath that could be upgraded to create a cycle path from the Park and Ride into the city centre via Grosvenor Bridge (that avoids the towpath!). Because at some point, some bright spark in the council is going to realise that a NextBike station at the P&R provides a flat ride into the city.

A friend of mine felt this ended a bit short, and I did wonder if there was something more I could add to this and it came to me this morning after hearing the news that a 42 traffic light junction worked better when all the lights broke. This reminded me of the oft quoted but not easily explained Poynton traffic scheme.

We live within a city that feels like it is choked by the traffic that comes into it and yet highways is deeply wedded to the idea of using traffic lights and SCOOT to optimise vehicle flow. Traffic light intersections require more space (right turn lane) and create 50%+ more pollution.

Yet councillors still bow to this “expertise” from their council officers. We need councillors to force Highways to make more radical choices. London Road, as previously discussed, is a classic example of delivering a pigs ear rather than recognising that without changing the whole of London Road, whatever you deliver will be awful.

I note that the council commissioned another report by Mott McDonald in October 2015 looking at site H. This sensibly establishes a roundabout on A46 BUT again it costs it as a park and rail, not a park and ride. It also gives a possible site parking spaces as 2850 (after expansion). This feels like somewhere somebody does not want this to happen.