One of the problems councillors have is the message they get from their constituents. I’ve been told that almost on a weekly basis they get a complaint about the behaviour of “cyclists” riding on pavements. As somebody that lobbies hard for more cycle infrastructure, I am asked to justify having the council spend resources on delivering cycle infrastructure when “you cyclists” behave so badly and what am I doing about them as chair of CycleBath?

I’m very much sitting between a rock and a hard place. It is the design of the roads that is driving this behaviour and preventing “normal people” from cycling. To solve it you need to re-allocate space and start treating cycling as a 3rd form of transport. This takes money which “we cyclists” do not deserve.

My concern now is that initiatives like Highways “Safe Routes To Schools” will just have councils delivering shared paths as a solution for cycling. This will just result in even more letters and complaints. Shared paths, through design, tell users it is ok to cycle on footpaths.

But I think this article is right, we need to change the way cycling is perceived. It is about having 8 year olds cycling to school without parents worrying. It is about cycling as a mobility aid. It is about being able to pop to the shops and carry more stuff home. It is about staying connected to your community.

Councillors need understand it is not about cycling clubs going on 100 mile rides or racing down a wooded hill. There is a huge chasm between cycling as sport and cycling as a form of transport.

If councillors cannot see the benefits to their constituents of investing in cycling. If all they see and hear about is the bad behaviour of “lycra louts” and aggressive pavement cycling, then the onus is on people like myself, like yourself, to educate, to positively engage with councillors.

I also think many of the bike companies operating in this space have a responsibility to change the message they are putting out. That it is not just about the sport/leisure of cycling, but about the practicality of everyday cycling and the health benefits it brings to yourself and your community. More importantly the different style of bikes that are needed for everyday cycling. Their marketing message needs to change.

It’s not an easy ask, because no other group I know is collectively held responsible for the actions of others. I do not blame the president of the AA for speeding motorists. There are just inherently bad road users and cyclists being an outlier group are more harshly judged.

Yet I cannot blame somebody for pavement cycling. I feel very uncomfortable having a 40 ton HGV pass me. That person riding on pavements could ride significantly faster on roads, not having to deal with pedestrians, side roads and street furniture. It will take them far longer to get to their destination. They do it because they fear riding on roads. The behaviour constituents complain to their councillors about, is determined by the design of the road.

Provide cyclists with their own segregated space and this behaviour will vanish. This takes money from an ever shrinking council budget and what the councillors are hearing from their constituents and seeing with their own eyes, we “cyclists” do not deserve a road space safe enough for children to ride to school.

So I’ve rambled on a bit much here, but there is one final thing you can do. As part of your Council’s Capital Highways programme you will see a significant amount of money being spent on road re-surfacing schemes. These are opportunities to place a road on a “road diet” and implement advisory/mandatory 2m cycle lanes, or even convert a quiet rural road to a cycle road. Engage with your parish and your councillors and educate them. This is how New York city transformed itself. When you resurface, place a road on a road diet.

As Easy As Riding A Bike

The biggest barrier to cycling uptake is the physical environment. Survey after survey, study after study, shows that it is road danger – and in particular, the unwillingness to share roads with motor traffic – that prevents people from cycling. When that barrier is addressed – even on a temporary basis in the form of events like Skyrides – cycling suddenly materialises, thrives and flourishes, quite naturally. 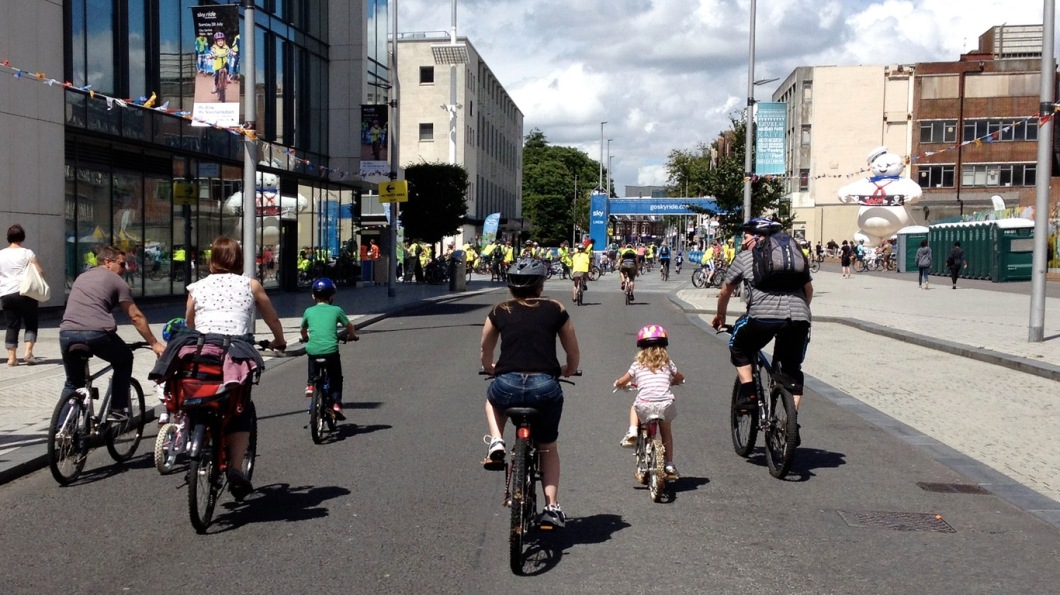 By contrast, we should be deeply sceptical of claims that the way individuals behave or dress while cycling has any bearing on cycling uptake. That behaviour, the way people dress, and the way the current cycling demographic is skewed towards men and away from the young and the elderly, isn’t the problem, merely a symptom of the actual problem. Or as Beztweets puts it, ‘a product of the true barriers to participation, not a barrier itself‘. Sure…