I have taken Bryn’s rather good email about the situation and put it here. Over 1500 people fought to have a segregated cycle lane in place, now the council want to create a shared space solution creating conflict between people walking and cycling along London Road.

Nigel Sherwin, Dick Daniels, Bryn Jones and myself have been fighting a rear guard action for months trying to get information out of the council.

WE NEED YOUR HELP. IF YOU WALK OR CYCLE ALONG LONDON ROAD THESE CHANGES MASSIVELY IMPACT YOU.

The Council have now proposed changes (see Executive Forward Plan Reference E2820) which we feel will be detrimental to  encouraging cycling and could force cyclists onto the narrowest 3 lane section of the road near the Cleveland place Junction. The foreword plan doesn’t attach the plans in the appendices, which does not seem very open form of consultation.  One has to either visit the One Stop Shop or ask for an E mail copy from the officer noted on E2820, but these are shown below along with the details in Bryn Jones’s E mail to concerned cyclists.  One major problem has been the Council’s failure to put up loading notices in the 2 loading bays thus allowing 24hour unrestricted parking since June, to detriment of both traders and residents, but this failure should not be a reason for penalising those wishing to cycle. – Nigel Sherwin

Please act soon to object to new proposals to reduce the off-road cycle lane on the south side of London Road leading to the Cleveland Place junction!

Prior to 2004 when parking bays were first introduced the cycle lane was unrestricted.

In 2014 the ‘Gateway’ scheme proposed removing the lane completely.

In our campaign to prevent removal 1500 people signed a petition to keep the cycle path.

Eventually a compromise was agreed with BaNES whereby the lane would be retained and slightly extended in return for extra parking elsewhere and limited loading periods of 15 minutes.

1) Retention of the cycle lane as a designated cycle path.

2) No parking allowed in the bays between 7am and 9am Mon-Sat.

3) Removal of pedestrian side clutter that forces people to walk into the path of cyclists.

4) Clearer demarcation of the cycle path and the footpath.

If you wish, please also make use of some or all of the information and relevant points below.

I wish to object to the proposals to make the cycle path into a dual use path and to the proposal that there should be either parking and/or loading in the two bays at Walcot Terrace 24 hours a day, as set out on drawing number MPLONPRE/TRO/4. The reasons for objection are as follows:

Details of the proposed changes are shown below:

Parking bay issues are as follows:

The on pavement cycle path is being replaced by a shared pavement:

There are also traffic signs which force pedestrians into the cycle lane: 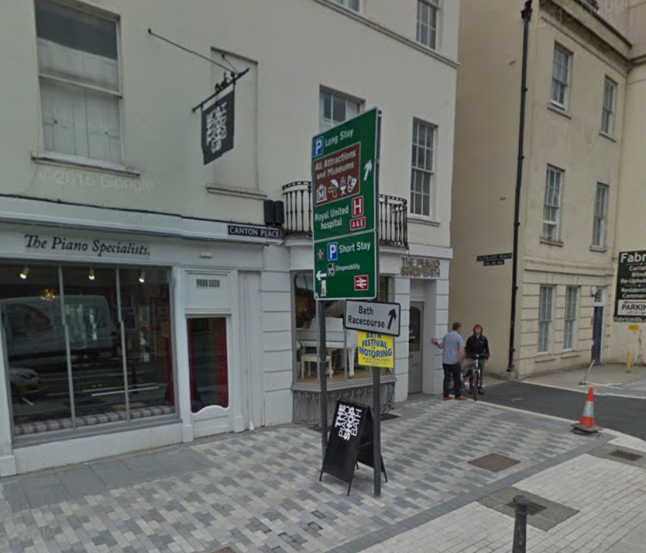 The  current design does not designate the cycle path clearly to pedestrians and cyclists.